One of Milan’s best located 3 star hotels, Hotel Mennini is situated just 150 metres from the Central Station, from the air terminals from Malpensa, Linate and Bergamo Orio al Serio airports and just 100 metres from the yellow M3 and green M2 underground lines for Duomo and Loreto (Corso Buenos Aires), Cadorna (change over for Trade Fair and Malpensa) and Sant’Ambrogio which, along with several trams and buses, guarantee a practical link between the Mennini and the business and tourist districts as well as the best shopping areas that the city has to offer.

How to reach us

Print the map with the directions to reach us

The shuttles from the international airports of Milan Malpensa, Milan Linate and Bergamo Orio al Serio, have an Air Terminal at Milan’s Central Station, which is just 300 metres from the hotel. From here you can easily reach the hotel by foot in 7 to 8 minutes. Just cross Piazza Duca d’Aosta in front of the station and take Via Napo Torriani and you’re there.

The hotel is just 150 meters from the Central Station. From here you can reach the hotel by foot in 7 to 8 minutes. Just cross Piazza Duca d’Aosta in front of the station and take Via Napo Torriani and you’re there.

From Venice and from the A4 take the Tangenziale Est and exit at “Lambrate” (exit 8), then proceed straight ahead along Via Rombon and Via Porpora until you reach Piazzale Loreto. Drive around the little Square and take Corso Buenos Aires as far as Piazza Lima. Take Via Vitruvio to the right, after 600 meters turn right into Via Lepetit and take the first right on the roundabout into Via Torriani, proceed for a further 100 meters and you’ve arrived at the hotel.

Capture this code with your smartphone to save Hotel Mennini address and GPS coordinates. 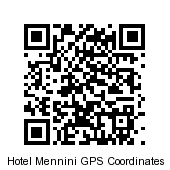 Fieramilanocity, the city centre trade fair in Largo Domodossola (Amendola-Fiera stop on the M1 line) houses important market-exhibitions known on a worldwide basis such as fashion events (Milanovendemoda, Modaprima, Sposa Italia etc.) and tourism exhibitions (BIT Borsa Internazionale del Turismo) along with Centro Congressi, the FMC Centre and PalaConvention it completes the facilities for congresses located in Milan’s city centre and has become one of the most important locations in Europe and in the world.

Fieramilano – A new quarter located in Rho, the last stop on the M1 (Rho – Fiera) and just 15 minutes from the city center’s trade fair grounds, is a futuristic location which was opened in 2005, a veritable exhibition quarter that redefines the Milanese trade fair scene. Completely avant-garde, it is an example of quality, functional and aesthetic standards of an international level.

In Milan, the worldwide capital of fashion and style, there are more than 600 showrooms and thousands of shop windows that set the trends for the new look of each season. Just 500 meters from Hotel Mennini you will find Corso Buenos Aires the heart of Milan’s shopping district, full of shops, around Piazza Duomo (Duomo M3 yellow line) you’ll find the most fashionable and trendy stores from those on Corso Vittorio Emanuele to the franchise stores on Corso Torino and the exclusive designer labels of the Quadrilatero della Moda between Via Montenapoleone (get off the yellow M3 line at Montenapoleone), Via della Spiga, Via Manzoni and Via Sant’Andrea.

In Via Montenapoleone in particular you’lll find Valentino and Versace, Prada and Gucci, in Via della Spiga you’ll find Dolce & Gabbana, Krizia and Roberto Cavalli, in Via Manzoni Armani, Les Copains and La Perla, and in Via Sant’Andrea Gianfranco Ferrè and the Chanel, Hermes and Kenzo fashion houses.